There was recently a poll on facebook on which BLACK SWAN LANE songs you would like an acoustic mix of, so by popular demand, here you go. The poll was on a new BLACK SWAN LANE facebook fan page called BLACK SWAN LANE RELAX AND BREATHE which is run by Alessandro De Matteis in Italy and Terry McGarry in England. Thanks guys! It took an entire day in the studio to complete this edited version which has several changes as well. I’m enjoying turning some of these into acoustic versions which is bringing out a lot of our picking and strumming, especially the intricate guitar playing by John Kolbeck. The drums, bass and 7 electric tracks were eliminated, but the main electric melody at the end was a staple that had to stay. There is some cool new panning of acoustics as well and some retooling of vocal parts. So, listen with a good pair of headphones. The only unfortunate part is that in order to load a longer track on word press, I had to compress my wave file to the lowest mp3 level there is. Ugh.

You may believe Revenge is a song about getting back at someone, but it is the opposite. I am still filled with anxiousness, but through my new spiritual journey learning about Buddhism and meditating nightly, I am a much more calm individual. (Kolbeck is laughing while reading this…) There is an app called Insight Timer which has helped me learn to breathe and find deep sleep when I need it most. It is also helping me in relieving the urge to write Nick Cole from the Scunthorpe Telegraph and ask if he really listened to our new album in its entirety before calling it bland in his extremely short and lazy review. 2 years of hard work, numerous mentions for album of the year and with a stroke of the keyboard – wham! It took a few extra meditation sessions to get through the word “bland” galloping inside my brain. Ha!

I do need to thank all of you who have included the new tracks in your podcasts, playlists, etc. Special thanks to Gideon Coe at BBC radio 6 for playing our stuff! Huge thanks to Jack Rabid, Jeff Clark, Nuno Almeida, Brett Holdaway, Jason Adolf, Shane Beck (Get Well May!) and Tim Forker for the wonderfully written and extremely positive reviews which are greatly appreciated! I know I’m forgetting several..

Thanks also to the music critic at the Essex Enquirer who actually has an ear for music!  “14 well thought out tracks.” Indeed!

Gracias to Barry Ricker for the videos of Sleepwalking and Golden Black. Very cool – check them out!

As You Live, I Will Live, As You You Breathe, I Will Breathe 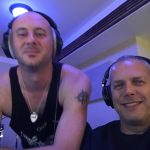 Love the song and the new cd…….My humble opinion, y’alls best ever.
Keep up the amazing music. Love you guys ????