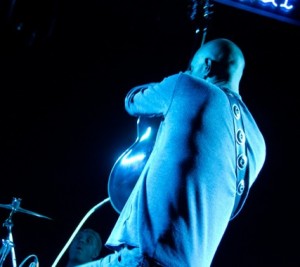 Black Swan Lane was founded in 2007 by Jack Sobel & John Kolbeck, formerly of The Messengers (1990 – 1993) and the great Mark Burgess, formerly of The Chameleons UK and the Sun and the Moon. A quick release of “A Long Way From Home” followed after joining up with some of Mark’s past band mates Yves Altana, Kwasi Asante & Achim Faerber. Anna-Lynne Williams of Trespassers William fame lent a hand on some vocals as well. One of the songs from this album (In the Ether) was recently featured in the major motion picture release of “Adventureland.” The first BSL album was really more of an experiment and collaboration of different artists with no definite direction and nobody had ever imagined the band would take on it’s own unique sound and keep going years later. It really wasn’t until the third album and Mark’s last with the band that Black Swan Lane would find it’s niche.

A year after the release of “A Long Way From Home,” Jack, Mark, Andy Whitaker & Andy Clegg decided to put on a one off show in the states as The Sun and the Moon which was received quite well. During the practice sessions for the show, BSL started recording several new tracks which sounded brilliant and led to the new album, The Sun and the Moon Sessions. Jimmy Oakes, a good friend of Mark’s from San Francisco joined the recordings as well which proved to be a success. Kwasi Asante, a native of Ghana, who played on the Chameleons last tour and currently resides in Manchester, joined Mark and Jack in the studio seperately which led to the track “Mother Nature.” Andy Clegg and Andy Whitaker, formerly of The Sun and the Moon, exhibited an explosive amount of talent and dedication in the new recordings which came out in tracks like “Tidal Wave” and “An Individual Mind.” This is a true eclectic world project with unique originality and form. The recordings were still quite experimental and the overall mix wasn’t perfected, but there was a spark of energy that fueled the fire for the upcoming albums that started gaining worldwide attention.

Jack and John started a follow up to The Sun and the Moon Sessions mid 2009 and was later joined by Mark Burgess. Things You Know and Love, the third album by Black Swan Lane, was released on April 5th, 2010 and was mixed and recorded by famed engineer, Jeff Tomei. Jeff, known for mixing the first Smashing Pumpkins album and many more alternative and rock acts has stayed with each of the band’s albums along the way which gave the band a much more professional and exciting sound quality. This third release has always been the band’s most concise and favorite of the bunch. It came together perfectly which rarely happens.

Staring Down The Path Of Sound, BSL’s fourth release, won the band even more fans from around the world and happened at a great time. Mark Burgess started up the Chameleons again under a new branding – The Chameleonsvox. We amicably parted ways, but decided to do a month long, 8500 mile tour around America together with both bands supporting each other. The American support was great and well needed, considering the majority of sales and fans had been coming from most parts of Europe. Former Interscope recording artist, Lauren Fay, did the backing vox tracks on this one and killed it. Coincidently, Lauren helped form The Messengers with Jack in 1990.

The Last Time In Your Light, the fifth BSL release,  won the most accolades for BSL and won numerous best album awards of 2013. It also hit number one on the iTunes alternative charts in Europe at one point. It was meant to be the band’s last recording before taking on additional projects. That did not happen. There were too many songs that had been left on the table and too many ideas still floating about.

A Moment of Happiness, a somewhat ironic title, based on the dark elements of BSL, is the sixth release and has a flow about it like no other. The band has dwindled down to two main composers, Jack Sobel & John Kolbeck, but our friends in Manchester, England are there to lend a hand when needed. The official release for A Moment Of Happiness is September 9th, 2014.

Under My Fallen Sky, the seventh release, contains 14 songs and was released on November 2017. One of the longest breaks between recordings, due to some unexpected life stuff, but the band played some great live shows with an incredible new line up. The cover art captured our sponsorship with Didcot FC perfectly and the album and story were featured in NME magazine. Primary songwriters, Jack Richard Sobel & John Kolbeck were joined by current band members Jason Monseur (Drums), Jerry Tew (Bass), and John Hamm (Keys/Guitar). Backing vocals were done by Gretchen Copeland and Lauren Faye, who rejoined the project. Described as having that classic post-punk, alternative Manchester sound, listeners will appreciate the layered, textured guitars reminiscent of The Chameleons and Kitchens of Distinction with soothing, yet darkly provocative vocals laying on top.

Vita Eterna. Eternal Life. The eighth full length album containing 13 amazing songs appeared in late November of 2019 and made a number of top 10 lists for 2019. It was also an album of firsts. Three female vocalists accompanied the band and Alex Dematteis in Italy co-wrote some lyrics with Jack Sobel. The biggest news was having the legendary guitarist, Dave Fielding from the Chameleons U.K. play on the majority of tracks. His signature ebow helped bring some songs to new heights. Krissy Vanderwoude, from the shoegaze band, Whimsical, was an amazing compliment to the tracks as well. For the cover art, we went back to the incredible Italian photographer, Andrea Gottardi, who also did the cover for A Moment Of Happiness. The album is summed up best by Jack Rabid’s first line of his review in the Big Take-Over magazine – “How to make a good thing better.”

The band’s first digital single. Scream For Me was released on April 26, 2020 during the 2020 Covid-19 pandemic. Since there were no live performances allowed and a shelter in place order was established, why not deviate from the norm and release a single? The digital only single came out for streaming at a time that a lot of people needed some new music. The song itself, however, was worked on for a period of two years and was completely gutted a number of times. Jack Richard Sobel then took two songs the band was working on and meshed them into one recording and was fortunate enough to get it to a point where Chameleons U.K. legend, Dave Fielding, could play ebow on top of it. It was left off of the album because it was basically unfinished and Jack had run out of time to mix it properly. After Dave headed back to England from Atlanta, Jack went back to the studio and completed it. Donn Aaron in Atlanta mastered it and friends of BLACK SWAN LANE, Alex Dematteis and Nanik Patti, found a brilliant Italian photographer named, Simona Sergi, who did the cover.

Hide In View. Black Swan Lane’s ninth album, due out on November 2, 2021, was recorded and mixed over a period of a year and a half at Wanderland Music Studios in Atlanta, GA. Jack Rabid of The Big Take-Over Magazine based in New York writes: Someday, BSL guitarist/singer/mastermind Jack Sobel and friends will stop making these exquisite albums, but I hope not anytime soon. This ninth one triumphs again despite being recorded in pandemic-related isolation (Sobel even recording/mixing), extending his/their second-act run of remarkable. There’s no Chameleons this time, neither Mark Burgess (early LPs) nor Dave Fielding (2019’s superlative Vita Eterna), but even unaided, Sobel can painstakingly project postpunk’s dark nights of the soul. Though Atlanta-based, like New York’s Interpol, he manufactures the muck of Northern Blighty’s misty moors as if he too were from Middleton. Prizes such as “Hide in View” and the Ride-like “The Fear” purr, too, like wet wind-tunnels of beautiful, ill-omened unease. (RIYL Sad Lovers & Giants’ “Cowboys,” the Chams’ “Intrigue in Tangiers,” and Joy Division’s “Disorder.”) Varying rhythms and textures, he pervades this gorgeous gloom with heart and soul (in isolation), engaging effects-accented guitars that seem to arrive from entire netherworlds. Genuine artistry, again.