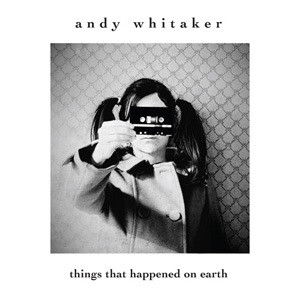 Sounding truly wonderful, this is a very unique album that has some touches of Nick Drake, The Beatles, Dead Can Dance, XTC, Black Swan Lane and definitely The Sun and The Moon. The new solo project plays like a great follow up to The Sun and The Moon’s, The Great Escape album. Andy Whitaker and Andy Clegg have been talking about doing this record for the last several years and the time has finally arrived. Jack Sobel and John Kolbeck of the popular alternative rock band, Black Swan Lane, produced and played on the record and many fans will hear some of the signature BSL sounds emanating throughout. Most of the recordings were done in Atlanta, Georgia and some were done in Andy’s hometown of Manchester, England where Stephen Wilson lent a hand with recording and backing vocals.

I am also happy to report that famous French photographer, Julie de Waroquier, has one of her pieces on the cover of the record.

According to Andy, the writing on this album happened organically over the past 5 years and he had the title for the record from the onset. ”This will be the record to leave behind when I’m gone.” This is the album to send into outer space for other civilizations to get an account of what life was like on Earth. Songs on the album delineate subjects such as The Suffragettes, The Dawn Of Man, Prostitutes, Religion, Love, Sex, Death and The Life of Andy.