Staring Down The Path Tour. Day 10 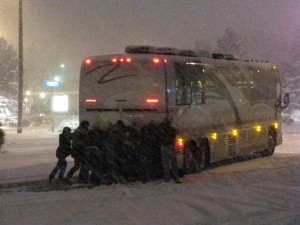 Day nine ended with the bands pushing our tour bus up a hill to a Best Western Motel. The fortunate side of it all was the fact that I had requested a pit stop for the bands to eat. If we had not gotten off that last exit in Wyoming, we would have been stranded on the side of the road outside of Evanstan. Wyoming closed all the roads due to heavy snow and icy conditions. The other fortunate side of things is that I got the best night’s sleep I have had in over a week. I rented a couple of rooms, wound up staying in one of them and caught up on some much needed sleep. The crazy thing about last night is that I dreamt about us sliding backwards on a hill in the bus about two weeks ago and abruptly woke up. I even told several people about the dream the day it happened and then last night, we went sliding down a hill in western Wyoming. I made Sam, the bus driver, open the door, so I could jump from the bus and run for help, which he did not agree to at first. I pushed the issue, jumped out and ran into a local restaurant where they called for a sheriff to come help. Moments later, the local police sent three vehicles to block the street and we began, literally, pushing 27,000 pounds up a hill while the bus wheels were spinning in front of us. We finally ate some dinner at the motel restaurant and tried to piece the rest of the trip together. The weather is calling for the storm to last a while and produce a couple more feet of snow. Fuck. Just saw an avalanche warning on television. Fuck. Now, there is something else to worry about. We left the motel at 11:00 am, got supplies for the road at the local truck stop and we are currently white knuckling it down highway 80 towards Cheyenne and the tip of the Rockies. We have passed many accidents on the road and I’m questioning the fact that we are now risking our lives to sing a few songs to folks. It is 20 degrees outside, there is blowing snow, black ice, our driver is going too fast for the conditions and I am freaking out. Yes, I am the worrier on the bus, but I have every right to be after last night. 4:48 pm. We have made some progress after stopping many times on the highway due to severe wrecks. Tara, our band manager, has been of great help to us by way of the phone when our cell service is operational. She has been there every minute checking the upcoming weather and road conditions. The roads are still a mess but they are supposed to clear some in Nebraska. We faced the option of cancelling our show in Chicago or risk skidding off a cliff in Wyoming. We all decided to persevere and risk the road. Mark was the most passionate of the bunch and was roaring to get on the road early this morning. I hope Chicago is a great show because we are doing everything in the world to get there right now. We are not entirely sure where we are stopping tonight, as we are trying to make up time from earlier. It is getting dark, however, and we are still on icy roads going down mountain hills. If you hear from me tomorrow, we have made it safely.

2 Comments for Staring Down The Path Tour. Day 10

Why do I bother calling up ppeole when I can just read this!