Staring Down The Path Tour. Day 13 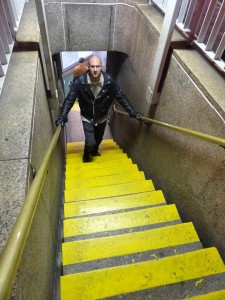 We left Rochester at about 6:00 am and headed towards Boston, which would be one of our shorter drives.  We woke up to Mark yelling about the fact that the bus satellite did not have the channel that carried the Manchester City game.  He attempted to stream it on the computer, which halfway worked, and the rest of us watched the Manchester United soccer match on television.

Before we slept a few hours, we boarded the bus and listened to music on the iPod, all of us tightly packed in the bus living area.  There have been many nights now where we have sung songs and bonded at night, especially after shows that have been strong and the audience has helped bring us back to life after long tiresome drives.

Did I mention yet that the top of the bus is leaking now when it rains?  Water has come dangerously close to dripping on the new mac pro as I’m typing.  Awesome.

About an hour outside of Boston, we stopped off at a grocery store and got essentials for the bus.  We were short on time, but I managed to pile a couple hundred dollars worth of odds and ends into my cart.  I have never been to the Big Y grocery store before, but I must say, they have the best oatmeal raisin cookies I have ever had.

Cambridge was a very cool town and was cleaner than most we have visited.  We took a stroll, took in some shops and had some tamales at a local Mexican place before going to sound check.  Sound check was a bit rough and we discovered the equipment and monitors were a bit outdated and not in good condition, but we kept our spirits up about it.  The opening act, the Curtain Society, were very nice and extremely talented.  I checked them out online before arriving at the club and was excited to see them perform.  They are worth a listen.  I could not hear my own voice during our set when we took the stage and consequently, my vocal performance did not exactly turn out the way it should have.  Folks in the crowd seemed to enjoy it, but after watching a video from the night’s gig, I thought it was substandard at best.  The sound guy at the club admitted the equipment wasn’t up to par and there wasn’t anything else he could do with the vocals, which made for a hard night on stage.  After I decided to skip a song and shorten our set, the sound guy called out from the booth that our tenth track would be our last song.  Seriously?  We drove 8000 miles and we can’t play two more songs?  I then informed the crowd we had a couple more to play in lieu of bashing the sound-man over the head with my microphone stand.

The crowd was great and very receptive and we filled it up last night, which was great for a Tuesday night.  On another positive note, our merchandise sales exceeded every other night of the tour in Boston, so I guess we made a better impression than I thought.  Wzbc radio was there and did a great job promoting the show and everyone who worked at T.T. The Bear’s was very cool.  If the sound system had done it’s job, it would have been a perfect evening.

Off to the Big Apple…  My first stop will be Chinatown for some good food!

2 Comments for Staring Down The Path Tour. Day 13

Hi Jack,
I was in the audience at the Cambridge show and it sounded great! (Chameleons Vox not too shabby either!) So don’t beat yourself up about the sound too much. I look forward to the next show in Boston/Cambridge.~Ken

I’ve been following you all around the country with the help of my trusty laptop. Even the the most menial details are appreciated because, taken on the whole, they help to paint the picture you are creating for us.

You don’t need lil’ ol’ me to point this out for you but, in spite your aforementioned difficulties, this tour is basically a really cool deal. I know, there’s no glamour in pushing a bus, or waiting for a driver to come to the lobby so you can take a shower, or dealing with insolent pricks while trying to make up time, but you are doing RIGHT NOW what the vast majority of us musicians will never experience, wether it be due to circumstance or lack of BALLS to get out there and do it. For some of you this is old hat & you can probably point to better tours, but the bottom line is you have made this thing “BLACK SWAN LANE” come to life & I look forward to what comes from it.

Congratulations on living life to the fullest. No go make some chili for lunch. Go Manchester!