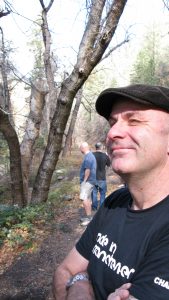 Our friend and musical icon, John Lever, has died.  Journalist John Robb wrote: “Lever was the engine room for some of the greatest songs of the post-punk northern eighties.” I couldn’t have said that better. His strength and stamina behind the drums was both outstanding and impressive. I don’t know anyone who could have pulled off playing a demanding Black Swan Lane set and then a Chameleons set consecutively, almost every day for a month. The guy was a machine, but he also had a huge heart. He recently sent me his only copy of a limited vinyl re-release of the Chameleons, Script Of The Bridge along with a very nice note. On tour, we talked about his obsession with coin collecting over coffee. I decided to part with and give him my coin collection after our tour and he turned right around and gave the collection back and told me to give it to my son instead. I was floored with his level of appreciation for the little things and was graced with someone who was truly humble. The picture posted is from a stop at the bottom of the Sedona mountains in Arizona where John Kolbeck and I caught him smiling at nature’s beauty.

When I first heard The Chameleons U.K. in the late eighties at a friend’s house, I was immediately hooked and I’ve been a fan ever since. I bought everything I could find from them and eventually discovered The Sun and The Moon which was another gem from Burgess, Clegg, Whitaker and Lever. The Sun and The Moon is also at the top of my favorite bands of all time. Before I became the frontman for The Messengers and Black Swan Lane, I was a drummer since the age of eight. I first played to Beatles and AC/DC albums, but eventually graduated into playing along with Chameleons albums. The only track I could never figure out was Soul In Isolation which John taught me to play. I never knew he played the set right handed and backwards and added an extra snare to the equation!

I’m going to miss his emails and texts. They always started out, Howdoo 🙂 Jack and ended with, your friend and brother…always…John Lever xx.  He helped me with anxious times on the road and made me laugh my ass off when there were conflicts and chaos. He let Burgess step into the spotlight after the shows and hid from the glory and fans, typically deciding to load up and rest for the next gig. He temporarily gave up his demons and addictions and was strong for a while until they came back to haunt him at the end. He expressed his wishes for wanting to do new material and most recently executed his dream into a new project called The Red Sided Garter Snakes. Before this, we were supposed to hook back up and do new BSL material together, which, unfortunately, never came to fruition.

I’ve lost many friends recently, but this one has hurt the hardest. As a teen, I never thought I would meet my idol, let alone play on the same stage and become friends with him. He WAS the engine of The Chameleons U.K. and he, as well as the rest of the band, deserved so much more recognition for coming up with their own unique sound which so many bands have tried unsuccessfully to emulate. It is also painful because we are separated by enormous seas and I was unable to give him a proper goodbye.

My sincere condolences to his partner, Lisa, his family and all his friends and fans from around this crazy planet. Goodbye, my friend and brother…always…Jack xx

What a nice tribute, Jack. I was hit hard by this news. Whenever I listen to his records, I am awed by his playing. And I have really enjoyed his recent work with The Red Sided Garter Snakes. I hope your memories of him bring you some comfort. Peace.

Thank you, Dave. All the best xx

Brilliant send-off to John, truly a one-of-a-kind musician and extraordinary drummer. Love the picture of a sunshine-graced smiling John- just how I would want to remember him.

…a really lovely and fitting tribute to a true legend…John was an old friend and, briefly, in the first line-up of a band of mine (from Merseyside) called Politburo, which also included, for some time, a certain Andy Clegg…we recorded some demo’s at Cargo studios in Rochdale (this was when John had a short hiatus from The Chameleons…). I will never forget the immense sound he made and just how technically good he was…it was an absolute honour to have known him and to have played bass alongside him…he was a mad bugger, but in the best possible sense….your typical drummer…

the last time i saw him (and i was desperate to see him and Andy again sometime this year, which is pretty hard to bear right now) was in 1987, at a Sonic Youth/Firehose gig in Manchester…he spotted me across the bar, ran around and gave me the biggest hug ever, it must have been maybe 2 or 3 years since we’d last seen each other…i asked him if he’d heard Firehose before (knowing how good George Hurley, the drummer, was) and he said he hadn’t, i told him to make sure to stay with me and watch them, which he did…and they blew his mind, which i knew they would…it happened to be my 25th birthday and we had a great laugh together…

my heart goes out to Lisa and the two Andy’s, his family and friends…i will never forget him, he was very special…

P.S.Goodbye my friend…i’m gonna miss you more than you could ever know….love Ian J x