Staring Down The Path. Day 2 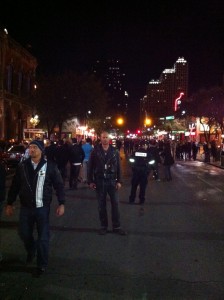 So after a small fire in the generator compartment at 1:30am, we tried to sleep.  I explained to the other lads who woke up at the unreasonable hour of 7:00am that I felt like a human vibrator.  The beds are directly above the engines running. We really lucked out last night. After we booked a motel for our driver, Sam, John Kolbeck and I took a brisk stroll to the local Waffle House for a late breakfast. On the way back, we noticed a huge amount of white smoke billowing from the bottom of the bus.  I called and woke up our driver, who ran out to help.  John and I were the only ones still up late, so I’m not sure what could have happened if we were all sleeping. The timing was perfect.

I tossed and turned till about 4:00am and finally settled into my tiny bunk until I heard English accents bouncing around the bus at 7:00am. Three hours is not enough sleep for me. I was lucky, however, to catch the driver coming out of his room around eight. He gave me his room key and I caught a quick shower.  We are headed towards Austin now and hopefully, we can get the generator repaired there.  Hoping to get some more practice in with the guys on the bus with our acoustic before the first show.  We have, of course, only practiced two days together.

We arrived in Austin and immediately went to the famous Stubbs BBQ restaurant for a late lunch before sound check.  Good stuff.  Sam, the driver, joined us at the bar and there was live music emanating from the downstairs of the restaurant.  Afterwards, we had a stressful sound check.  We couldn’t get the sound exact, but we made do.  BSL has a unique sound and it can be hard for an engineer to get it just right.  Night fell and we took the stage after the opener, Rescue Mission, a local band full of very nice and talented guys.  For our very first live show together (with the new band mates), we pulled it off and got a very nice reception from the folks in Austin.  Expectedly, there were a few rough spots, which we are going to aggressively tackle before our next show in Dallas. I don’t think the fans could tell there were any issues, but John and I could. A huge thanks to Joanna for printing our set lists we left behind in Atlanta.

We got a chance to explore downtown Austin for a brief time after our set and I found it very intriguing.  Music was blasting from every corner and I’ve never seen that many tattoo parlors on two blocks.  No, I didn’t get another tat.  Tried to talk John into one, but to no avail.  Austin is a great food town.  Food trucks line the streets and I had to sample the local grub a little after midnight.  Pizza & hot dogs: all my favorites.  We loaded the tour bus and wound up going to bed around 4am and stayed put outside the venue on the city street.

As I’m writing this, I’ve realized I have picked the seat next to the bus restroom, which, to my senses, is not working out too well. Time to move.

Although we had a stressful start to the day, there wound up being a lot of positive energy and camaraderie at the very end.  We sold enough shirts and cds to get through another day and there were a lot of smiles shared on the bus before sleep time.

Four hours to sleep until our departure to Dallas and our next adventure.

4 Comments for Staring Down The Path. Day 2

You are always looking on the bright side, Jack – I love that about you! I am sure the Dallas show tonight will be awesome. Get some rest – long tour!
Martha

I’m not easily ipmrseesd but you’ve done it with that posting.

Nice job at Trees, in Dallas, last night. Enjoyed the show. Cheers — be safe on the road.

hey, we went to stubb’s for dinner before the show too LOL. glad i could help with the set list 🙂 and both shows really did sound great from the audience side. people were really really digging your set. both nights. i hope you finally got a little bit of sleep. safe travels and all that.