Staring Down The Path Tour. Day 11 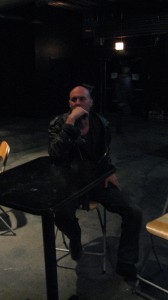 We drove many hours more than we should have in the middle of the evening in order to make up some time lost in the storm in Wyoming. After making it through the state of Nebraska, we stopped off at a Days Inn Motel right inside of Iowa near some large casinos. It was 3:00 am by the time I checked our driver into a room (for which he would sleep about six hours) and then I retired to the snow & dirt covered bus for a total of five hours sleep. I met Sam in the lobby the next morning, so I could use his room for a quick shower before the next leg of our journey. We were, basically, back on our schedule. We had about eight hours left to get to Chicago. Load in is at 5pm, but we were thinking we would probably be an hour or two late. That is a true miracle, considering what happened in the wonderful state of Wyoming. People really have to love snow and bitter cold to live in these states.

We arrived at The Bottom Lounge in Chicago about an hour late for load in and sound check. With the help and phone support of Tara, our manager, we found Sam, our driver, a suitable hotel in Chicago via the web and got him transported over by the club manager. It was very disheartening, however, to walk in the club in Chicago and see that our name was left off the promotional flyer. I am, of course, only doing this tour for the promotion of Black Swan Lane, who many in the US have never heard of before now. John wasn’t thrilled either. Overall, most of the staff at The Bottom Lounge was cordial and accommodating. The premises and back stage setup was very nice as well, however, the two soundmen treated me like a second-class citizen. They were dismissive and hard to communicate with and they rushed us through our sound check. If only they knew, (when I have really nice, accommodating sound guys), I regularly tip the sound staff and take care of them at the end of a show. They acted like they did not want to be there last night, and we were whisked off stage rapidly to prepare for two hours of nothing. Granted we were running a bit late, but considering what we had been through, give us a few extra minutes. I know it seems trivial, but it can screw the entire night up for me. We could have cancelled this show, but we decided to drive on ice and snow to get here. At least treat us properly. The sound out front was good, however, we all complained about the stage & monitor sound. If it is not perfect on stage, it is very hard to get through a show, so you pretty much want it to end quickly. Several issues made it an off night for me. Being frazzled a bit by the initial experiences on arrival actually made me make some of my first on stage mistakes of the tour, which were embarrassing to me. I want to give our fans a perfect experience and although many folks said we were great, I feel I failed a bit and didn’t put everything I had into it. It could have also been the previous long and tedious drive over to Chicago through icy hell.
The fans in Chicago were very nice. Some of which drove hours to see us play and showed up with BSL memorabilia and t-shirts ready to be autographed which helped save the night for me. I am grateful there are some folks out there who are passionate about our music and I love all the feedback before and after the show. It was a pleasure coming face to face with some of our fans I have met online and we hope to see you again soon in the future!
Off to Rochester, N.Y at 4:30 am

J
p.s. I’m getting used to waking up to Barclay Premier Soccer games on the tele…Go City!!

2 Comments for Staring Down The Path Tour. Day 11

Your efforts are paying off! Saw you in Oakland and SF and have been listening to BSL since then. Nothing else on rotation (except for some occasional Chameleons UK)! Keep the faith, and try not to be too hard on yourself 🙂

Safe travels to NY. Wish we could be there!

Well, despite your having risked life and limb to get to the Chicago venue, I must say that I came away a fan. Not being terribly familiar with the band prior to the show, aside from having listened to the tracks on the website here, everything sounds much more impressive live! Shame the sound guys treated you so badly, but I can surely say that the sound out front was awesome. I shall soon be investing some hard earned cash in some new tunes. I do hope the journey to Rochester and the gig went at least slightly better than the last. Sounds like you deserve a break!

Also…thanks to you I now feel compelled to rent “Bridesmaids” in preparation for my pending trip to Mexico…if for no other reason than as a mental prophylactic for warding off Montezuma’s revenge. ;-P Cheers!