Staring Down The Path Tour. Day 12 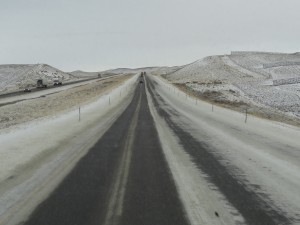 We wound up leaving Chicago around 5:00 am for Rochester.  My parents met in Rochester, which eventually led to my place in the universe.  I really wanted to take in some sights and visit some places in Rochester I hadn’t seen in many years, but it was not to be.  We arrived an hour late for load in at The Water Street Music Hall and had to rush through sound check once again.  The taste of the deli at Wegman’s Grocery and the smooth custard at Abbott’s would have to wait till my next visit.  I always seem to associate cities with the food they have to offer, so I turn into Pavlov’s dog on the way into them.It is still hard to sleep while the bus is in motion.  John, however, is sleeping like a baby, which is pissing me off.  I have no idea how he can stay asleep while this death tube is bouncing to and fro.  All of us, however, are still getting our sea legs.  After a stop and exiting the tour bus, we find the ground still moves for some time.  If you get motion sick, do not get on a tour bus.  It will not be pretty.

The drive to Rochester was long and we lost another hour heading east with the time change.  We arrived at nightfall to clear but cold weather and got set up as quickly as possible.  A representative and director of marketing for Whirlwind USA dropped by to let us sample some great music gear and dropped off presents for the band, which was nice.  They make great music pedals, cables and gear and Will, the rep of Whirlwind, is a huge Chameleons U.K. fan.

The sound engineer for the club, Roman, when asked how long he had worked for the venue, informed us he had come with the bricks.  He was a stocky, abrupt character who cracked one-liners, but knew what he was doing and got things done very quickly.  I tipped him, thanked him for giving a shit and told him about our last experience with our sound engineer.

The promoters for the show went above and beyond and made collectable pins for the first 100 people in the door, which was a nice touch.  For a Monday night gig, they also did a decent job of getting some people there.  The fans were very sweet and I again fully enjoyed meeting them in person.  An old high school acquaintance, Rosemary, surprised me and brought a friend of hers to our show along with a package of New Mexico Red Chile for the bus freezer.  Very cool and much appreciated, especially since I couldn’t venture out to food spots in Rochester.  I was disappointed, however, my only remaining family in Rochester did not make it out to see me.  I wanted to show my cousin, Dickie, how well I had taken care of the leather biker jacket he bought me for Christmas when I was a teen.  Oh, well.

Phone and web service has been in and out the whole trip, which I hadn’t planned on.  If we aren’t in a major city,  it doesn’t work, so Netflix and HBOgo have not been used at all  By the time we are in the city, we are working hard.  Consequently, I have been either staring out the window at trees and hills or typing this blog for you all.  If I had HBO and movies to watch, I’m not entirely sure this blog would exist.

Next stop, Boston. It is Cambridge, actually.  See you there. J

2 Comments for Staring Down The Path Tour. Day 12

Was at the show last night in Rochester and I just had to say how I really enjoyed it. I asked you about how I was trying to find some songs from The Messengers. That song you performed (December 7) was absolutely fantastic. Both my Wife and I thought it was one of the highlights of an already great set.
I have been a fan from day one and own all your albums and I can’t want to hear more!!
Wish I can make the rest of the shows!!!

First, thank you. I was at the Rochester show
and didn’t know what to expect. I saw the
Chameleons for the first time in 2002. It
was an amazing show. I wouldn’t have missed
this one for anything. Second, while the Chameleons
speak to me, I felt your music spoke for me.
So again, thank you.