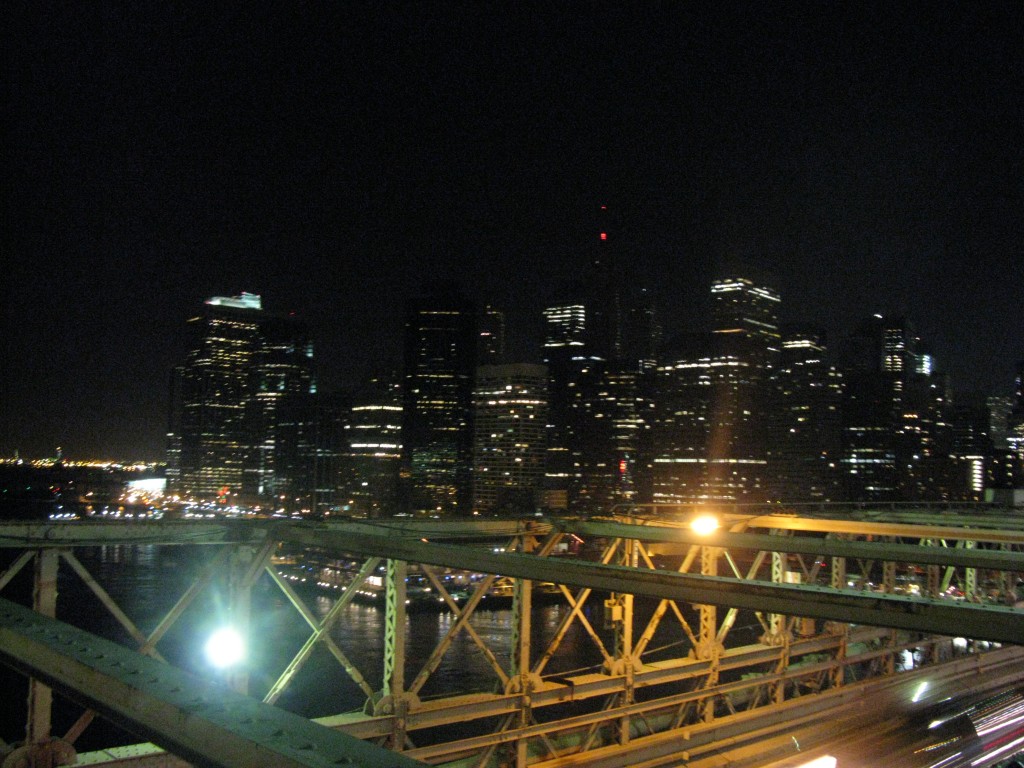 I had to mentally prepare for our arrival in New York.  I would be waking up on the bus in a location unknown.  It turned out, Sam, our driver, found a fantastic spot on an overpass above a subway transit area.  It’s proximity to a 24-hour shop & deli was ideal and the police do not mess with busses & trucks parked on the side of the street.  We are parked on 11th avenue near 30th street and have a great view of the empire state building.  Navigating through the city on a tour bus, however, is a complete nightmare and I think when people are taught to drive in New York, they start with how the horn works.  My senses are overwhelmed and I keep asking myself why people would want to mess with living here.  Visiting has been an incredible experience and you couldn’t ask for better food and a great mix of culture.  I do, however, prefer the serenity of Lake Allatoona back home and for the price of a small duplex in New York, you could have a mansion elsewhere.

The first scheduled venue for the city was a club called Home Sweet Home, club Weird.  It was the smallest venue on the tour, with the smallest stage and we decided not to do the show with Chameleons Vox.  We weren’t scheduled for the show, but we were asked to play the night before.  The club was too small and too tight for a five-piece band, so a day off was a pleasure to have.  The club wound up selling well over two hundred tickets for the show in a space that holds about fifty.  The concert started at midnight and it was packed in like a can of sardines.  John and I elected to take a stroll down to Chinatown for dinner and it was heaven.  I haven’t had Chinese cuisine that great in years and it was just like being in China, especially since we were the only Americans inside the restaurant.

After the Chameleons show, our gang danced, drank, made friends and drank more for the next couple of hours.  Getting everyone back to the bus, which needed to move back to our cozy bridge spot, was not an easy task that night and tensions rose when everyone was aboard.  We did need to focus more attention on the group ensuring the equipment made it back to the bus before the partying starts.  At the end, we all hugged it out.  A couple of weeks on the bus and I truly feel like we are all becoming brothers who share a love and respect for each other.  With eleven people aboard, we sometimes want to kill each other, but at the end of the day, it is love and light.

I am thankful for friends and family who truly care and give back.  A friend and former guitarist for Chameleons Vox, Justin Lomery, invited all of us to his cozy home in Brooklyn for a Thanksgiving feast.  The first thing we did was shower, which is always a luxury on the road.  It was my second best shower of the tour.  Justin’s fiancé, Lauren, played hostess and made a great feast, which made Thanksgiving better than I imagined it would be.  I’m not one who enjoys just sitting around, so I helped with some of the food and craving duty on the bird.  It was a very kind gesture to have us over and we are eternally grateful.  Justin’s band, Tyburn Saints, are the openers for the Brooklyn concert and we are excited to play with them.  We play in Brooklyn on the 25th and then Manhattan on the 26th.  If you are around New York, come on out and catch our show.