Staring Down The Path Tour. Day 16 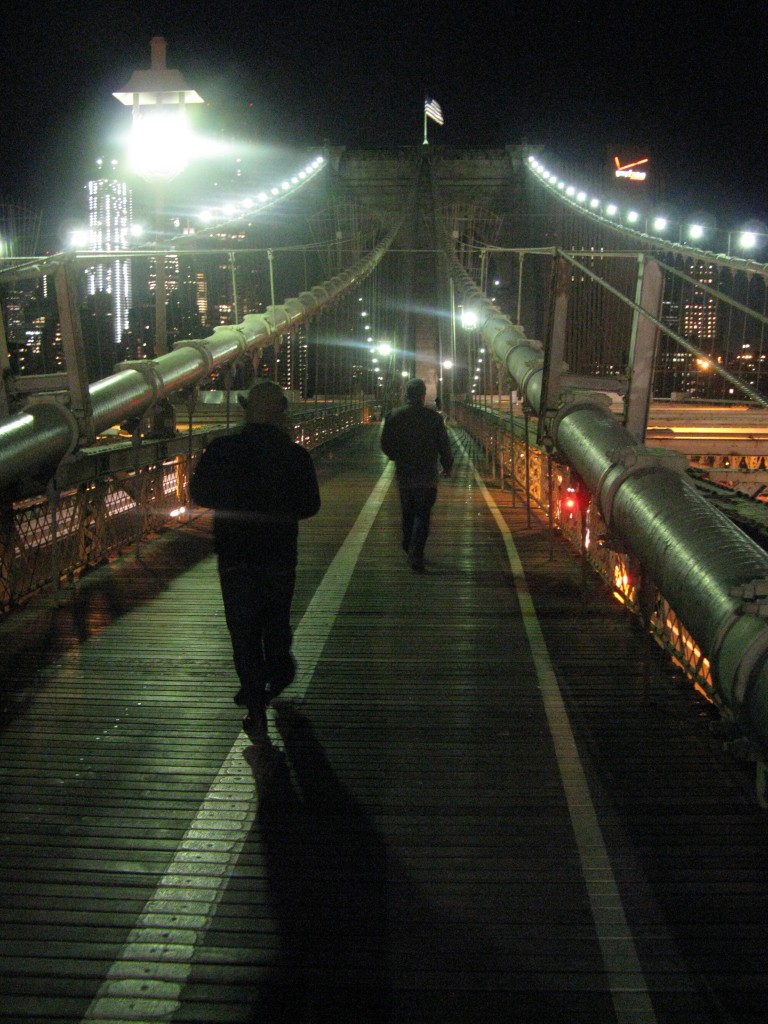 After our Thanksgiving feast in Brooklyn, we settled back into our spot on the bridge for the night.  Just before parking, some of the group decided to take a walk across the Brooklyn Bridge at 11:00 pm.  I opted to rest my feet and stay on the bus with a few others.  Our tour bus did not make the height requirement to enter the Brooklyn Bridge, so we had to make some turns and hit the Manhattan Bridge.  We then had to rendezvous with the rest of the group on the other side inside Manhattan.  Once finally parked, I found my way down to the deli on the corner for some gelato and cookies.  I was full from dinner, but I always have more room for dessert!

Our driver, Sam, has asked permission for his two boys to board the bus and travel with us to Georgia.  Sam has been very flexible with us so far and we couldn’t say no.  Mark Burgess’ mate, Ken, who was in the band The Cliches with him, has joined us on the bus as well. So now there are 14 people aboard.  Should I say more?

We arrived at The Littlefield, the Brooklyn venue, around 3:00 pm and decided to go for a stroll through the city.  Brooklyn is definitely unique and contains a huge melting pot of cultures.  It is busy and chaotic, but has a refreshing presence that shows how various groups of people can get along together in a tight space.  Our group settled in at an old Brooklyn diner called the Ocean View, which in fact had no view of the ocean.  It did have Belgian waffles and pancakes, so we were as happy as clams.  We walked a mile back to the club and were concerned when we saw the front of the place.  There was nothing that revealed that this was a quality club until the manager arrived and opened the huge metal garage door.  We walked through the front patio and art space, which eventually revealed a very cool stage and concert hall inside.  I was relieved that it turned out to be a proper club with a sizeable stage to play on and they even had a shower backstage.  A shower equals pure luxury at the moment.  Sound check seemed to go fine for us and I decided to take a stroll by myself to a small, local Japanese noodle house up the street, which turned out to be wonderful.  I have to continue to emphasize how awesome the food is in New York.  It makes everything in Atlanta pure crap.

I’m unsure how the audience perception of our show was, but on stage it was extremely hard.  John Lever, our drummer, was again irritated at the quality of the monitors on stage and had a hard time hearing the mix properly.  The rest of us only heard the bass guitar on stage rumbling and banging hard, which created a hardship for us. It impacted our overall performance.  Your goal on stage is to make the fans happy and in turn, have fun yourself.  The night’s performance was not a fun time for the band and tensions rose afterwards.  It was to be my first outburst and fight with other members of the tour, which looking back, stemmed from many factors.  Tight quarters on the bus, testosterone building up, financial stresses and stepping on each other’s toes may have led to my outburst last night.  The two at the front of the stage talking over my vocals the entire time didn’t help either.  You have no idea how distracting that can be.  Go the fuck outside if you want to have a loud conversation with friends at a concert.  The next time, I will stop what I am doing and tell you to shut it.  Ninety-nine percent of everyone at the shows is respectful.  It’s that fucking 1% again.

See you in Manhattan.  We all agreed to be happy as hell at  The Delancey Saturday night!

2 Comments for Staring Down The Path Tour. Day 16

It’s going to be a great night tonight at Delancey!

Tell them to shut the F up or leave. Then pour a stage beer on them.