Staring Down The Path Tour. Day 17 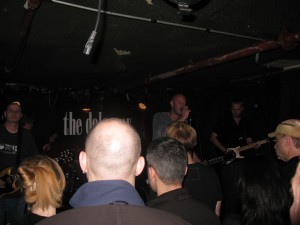 After arriving back at our home on the bridge overlooking the Empire State building, we made a trip down to the 24-hour deli and surprised the staff with a large order of cheeseburgers at 4:00 am.  I settled into my claustrophobic bunk with a sore back soon after eating and watched Netflix on my phone for a bit, trying to forget the stress from the night before.  I woke to a new day and we were all mates again.  We went into the day with a new sense of togetherness and the show in Manhattan proved to be a much better experience for everyone.

We arrived at the venue early and had some extra time to set up and sound check this time.  The Delancey was situated at the end of the Williamsburg Bridge in a funky neighborhood and definitely had character.  The venue was at the bottom of a long flight of stairs and had a musky aroma that reminded me of my Grandmother’s basement in upstate New York.  I was worried about how the sound would be, but the sound guy did a great job with the house system and he was very accommodating.  The Delancey was packed like a can of sardines and was the temperature of the sun.  Thank God we were playing there in late November.  I can’t even imagine what it would have been like in the summer.  Squeezing through the crowd to take the stage was intimidating at first, but I soon found my comfort level and accepted there was no way out once I was up there.  I need to remember not to drink a large black coffee before taking any stage, no matter how tired I am.  I offset the coffee with a small sedative and settled down minutes before taking the stage.  The crowd was welcoming and aggressive and it was a great change from the night before.  The front row behaved this time and I could actually hear my vocals on stage.  Maybe they read my blog?  We had a technical issue with the bass for the first couple of songs, which we corrected soon after and then had a good overall set.

I got to see a couple of familiar faces in New York, which made the long stay a little better.  One was a friend from Atlanta who I got a much-needed hug from.  Hugs have been rare and I got a big one from Sheila last night.  I also got to see, Todd, an old classmate from high school who now resides in New York and works for Rolling Stone.  It was great catching up with both of them.

I found a local NY pizza place on the corner, near the venue, and wound up visiting it on four occasions throughout the night, even though it had a C health rating on the door.  I’m still alive today and I am going to massively miss that pizza.  I’ve found nothing like it in Atlanta and especially Acworth, where I reside now.  The pizza may suck in Acworth, but the serenity of Lake Allatoona beats the hell out of being stuck in traffic on the New Jersey Turnpike, which is where we are now.  Sunday afternoon, and the streets are like a Walmart parking lot.  There is a small part of me that will miss our home on the bridge in Manhattan, but a large part of me is ready to get back to normalcy.

The guys are ready to try a new song in the set.  Off to New Jersey.

Great gig, and Brooklyn and NJ too. I thought you guys were real good. Very tight and a cool sound.