Staring Down The Path Tour. Day 18 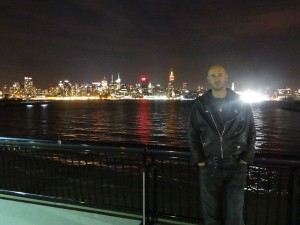 Hoboken should have been a 15-minute drive from Manhattan across the George Washington Bridge. It took exactly two hours on a warm, Sunday afternoon.  We found out New York streets and the New Jersey Turnpike can be absolutely crazy, even on a Sunday.  We still made load-in right on time, although our intention was to be early.  Parking was tough outside Maxwell’s, especially with a huge tour bus.  After circling the block a few times, we were given a space down the street from the venue, which made load-in a bit hard.  Walking with heavy equipment up the block was not ideal, however, when heading back towards the bus, we had a view of New York that was truly stunning.  The Hudson Riverfront on the New Jersey side showed the true magnificence of the Big Apple, which could not be seen from deep inside the city.  The sights made all the walking much more tolerable.

Hoboken was a nice change from being in New York for four days.  It was clean, well kept and car-horn free.  We pulled up to the venue and were immediately met by a BSL fan with all four of our albums, requesting them autographed.  The overall turnout was lighter than normal (expected for a Sunday over Thanksgiving weekend), but the fans were enthusiastic and wonderful.  One of the highlights of the entire tour has been getting to meet and get feedback from the fans after the show.  It has been fantastic to be face to face with people after the show, rather than dealing with the daily social networking monotony.

We changed our set around to change things up and even tested the waters with an older song that was requested by several people.  We rehearsed it once at sound check, borrowed a member of Chameleons Vox for it and performed the track, Lie Still.  Although it was on the faster side of normal and I made up a few of the lyrics I had forgotten, I believe we did it justice.

After our set, John Kolbeck and I walked down to the Hudson Riverfront, which, we could tell, was extremely well designed and cared for.  We decided to shoot some video footage for one of our newer tracks, Alvea, in order to take advantage of the greatest backdrop we had encountered on our tour.  The video turned out great and I can’t wait to start cutting and editing the footage.

We boarded the bus at 3:00 am and went on a scavenger hunt throughout the city of Hoboken for beer, water and supplies.  After stopping at a few stores, we realized beer was not going to be available.  Mark remembered the bottle of tequila I gave him in Atlanta as a present, and the top quickly became unsealed.  What ensued after was a small fiesta aboard the bus.  We had a couple of tag-alongs who boarded the bus en route to D.C., so we were now up to 15 people aboard.  The interior of the bus looked like something out of a third world country, but we didn’t seem to mind the lack of cleanliness.  The adrenaline and positive vibes from the crowd was still flowing through the band and we enjoyed the rest of the night on the way to our nation’s capital.

Next stop… The Black Cat in D.C.