Staring Down The Path Tour. Day 19 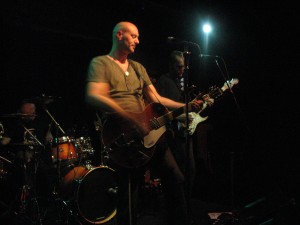 We left Hoboken in the middle of the night towards our nation’s capital in order to avoid rush hour.  We left with a couple of extra folks who tagged along and wanted to see the next show who would then catch a ride back with Justin Lomery to New York.  It was a cozy ride with 16 people to D.C.

We arrived at a D.C. grocery store in the hood and walked to a local McDonalds for some coffee and a shower in the sink.  Little did we know, the club actually had a shower in it, which is always an unexpected pleasure.  We pulled into the back alley of the Black Cat and witnessed some of the biggest rats running around I have ever seen.  The large creatures didn’t seem the least bit intimidated by a large tour bus or our presence throughout the night, which made them part of the physical landscape.

During the afternoon, the rest of the clan toured D.C. and the Capital, but I stayed behind to do banking and accounting for the tour.  I had to deposit funds and figure out if there would be enough money from the show revenues to support our final tour bus payments.  The glamour of touring fades when you realize the only person on the tour who will make a profit is the actual bus driver.  It is, after all, about hitting the fans with your music and getting yourself exposed to additional people.  If you have done your job and performed well, touring is a great form of advertising and promotion, so hopefully any present financial losses will pay off in the future.

The club made load in time at 6:00 pm, which I knew would not be enough time to set up and sound check three bands.  I was right and things got tense for a second time in the tour.  The club seemed to be on a tight schedule and wanted doors to open at 8:00 pm.  By the time Chameleons Vox were done with sound check, I was informed we would have to set up after the openers Dot Dash and perform without a sound check.  I snapped.  Yes, I had a short fuse at this point.  I threw my guitar pedals towards the stage and informed everyone BSL would not be playing at this venue (with a few additional harsh words thrown in.)  We had driven about 7500 miles by this point and we deserved a proper check.  I’m not about to get on a stage unprepared for people who have heard our albums or for people who are hearing us for the first time.  I was also tired at this point by arriving early to clubs and then being irresponsibly rushed through everything.  Mark & John came to the bus and told me fans were counting on us playing and we could do a sound check.  I came down from my adrenaline rush and set up on stage.  We completed half a song before we were hurried off the stage to get the openers ready.  At this point, I just went with it.

For a Monday evening, I was quite impressed with the turnout at the Black Cat.  The fans were awesome.  They were very energetic, grateful and passionate and I very much enjoyed speaking with a lot of them.

Before the concert, John Kolbeck and I ate at a local Mexican Restaurant.  This would later turn out to be the biggest negative of our trip to D.C.  We both fell ill, which made the trip from D.C. to Atlanta excruciatingly difficult and is why my blog is a couple of days behind schedule.

Next…A day off in Atlanta to recover from food poisoning.