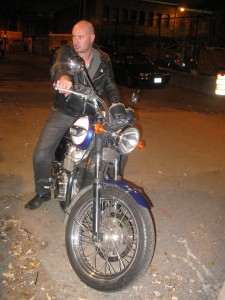 The trip from Washington to Atlanta was one of the worst of the trip.  John Kolbeck and I fell ill after eating Mexican food in D.C. before our show.  John was able to get to sleep for our journey back home, while I stayed up all night shaking and wondering if I could make it any farther on the bus.  At one point, I made Sam, our bus driver, pull over at 6:30 am so I could stand on solid ground for a bit.  I remembered I had an expired, anti-nausea prescription pill that I had packed for the trip, which I took before boarding the bus again.  I fell asleep briefly, but woke up again with severe stomach cramps.  The saving grace was that we were going to have the day off before playing in Atlanta and we were at the end of the tour and not the beginning.  On the way home, I was thinking I would trade strep throat again for the stomach issues any day.

Believe it or not, twelve hours after we left D.C., we stopped in Atlanta for Southwestern cuisine before heading home.  I ate very light, but I did o.k.  Seeing my family and dogs for the first time after our journey was wonderful.  Absence definitely makes the heart grow fonder.  During the tour, however, I did come to truly appreciate my home, my city and my entire family.  Getting off the tour bus and entering my home felt different and things even looked different to me.  Getting in my own shower was truly exhilarating.  It truly felt like I was just released from jail.  We did, however, still have two more shows to play and we would have to board the bus a few more times.  The only difference was, we were close enough to stay at home during the next couple of shows.  Well, the band would stay at my house, anyway.  With all the bedrooms completely full, Chris Oliver and I headed to my boat on the lake to sleep, typically arriving there somewhere around 5:00 am each morning.

We arrived at The Shelter in Atlanta the next day a few hours early for sound check.  We walked across the street to The Fresh Market for lunch, which was awesome.  Actually, after all the truck stop food we had consumed, anything would be awesome.  I talked the club owner into letting us in at 6:30 instead of 7:00 pm to start setting up.  We soon realized there was not a P.A. set up yet and I started to fear the worst.  Evidently, the soundman’s car had broken down and the club owner found a replacement who was on his way.  Upon showing up, the new soundman’s equipment (and lack of) was sub-par at best and even our tour bus driver, Sam (an experienced musician), had to get involved to try to get us the best sound possible.  It was a struggle, but in the end, we pulled it off and got a great response from the crowd.  Mark Burgess even noted it was one of our best sets to date.  After all the trauma and stress of the day, I just let loose and didn’t care a bit.  It seems that may be the best way to go into a performance.

I enjoyed seeing old friends and acquaintances again in Atlanta, but was equally disappointed with those who decided not to show.  I am still appreciative for those who did show and even braved thirty degree temps to stand in the cold while the club ran late to open the doors.  I do have to give the club some credit for not taking after show fees and expenses from the band like so many others have done on the tour.  For that, a big thanks.  We desperately needed the income to pay final driver expenses and end of tour fuel fees.

It was to be the last show that BSL would play with Chameleons Vox, and in the end, it worked out pretty well.

Y’all put on a fabulous show in Atlanta! I had no idea that you’d been sick the day before. Food poisoning is the worst! Glad your tour was a success….so glad I got to see BSL in person!
~R

Then trace the musical tree back to its roots, and at the very end of one of the largest roots you will find the Chameleons.