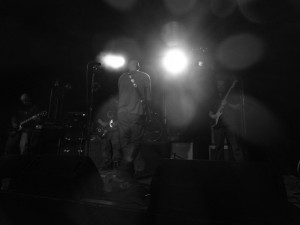 Dallas, Texas.  It was a short, 4 hour, drive to Dallas from Austin. We left at the unreasonable hour of 7:30am after going to bed at 4:30am in front of the venue in Austin.  Three hours of sleep was not going to be enough to get me through, but I had to endure.  We had a warm welcome at the club in Dallas on arrival from the show promoters and loaded in at 2pm.  This club really had its act together, especially in the sound department.  The engineer got the sound perfect for the show and the room in general at Trees was impressive. Ironically, there was a bar across the street called The Black Swan, so maybe it was a good omen.  Rescue Mission who opened for us the night prior was going to open up for us again in Dallas and they were as accommodating as ever.

The members of Chameleons Vox wound up walking down to Dealey Plaza to check out the site of the JFK assassination.  Along the way, Ray, the bassist  for Chameleons Vox fell into a cactus, which the band was still having a chuckle about when they got back to the venue.  John and I hung back to relax a   bit to get ready for the night’s show and we grabbed some awesome Mexican cuisine.  Mexican food may not be the best stuff to eat right before a big concert and a tour bus ride through the desert, but logic never really plays into our decisions all the time.  We are, of course, on a tour bus in the middle of nowhere, not having had a shower in the last couple of days. We are, however, hoping to rinse off before Albuquerque, which we plan on getting to Sunday afternoon.

We got the day off on day four.  I was happy to be off from playing because I got to see several wonderful people in Albuquerque who I haven’t seen in some time.  We are also about to play the next four nights in a row, so a breath of air felt good.  Before we left for dinner and a tour of Historic Old Town Plaza, we had to service our lavatory and search for missing cash that eventually wound up under a table.  We also had the luxury of taking showers at a day room at Hotel Blue in the downtown region of the city.  Coincidently, the hotel is across the street from a venue we really wanted to play at but was closed on Sundays.  It was fantastic to visit Albuquerque again. The city has changed drastically since I was last here, but it has kept its wonderful charm. The food is amazing and of course we all had Mexican again which is mandatory when coming to the Land of Enchantment.  Being in New Mexico again gave me a sense of calm and happiness I haven’t felt in some time.  Laughing with old friends and reminiscing about all the trouble we used to get into in our younger years took my mind off home for a few seconds.  We are currently waiting outside Hotel Blue in the bus for our driver, Sam, to finish his sleep schedule.  John and I are of course the only ones awake at this hour and we hope to be hitting the road for Phoenix, Arizona at 4:00am.  We are looking forward to playing at The Rhythm Room and are also hoping for more than three hours of sleep…

truly excited to see you in Phoenix ~ i hope your trip is safe and filled with smiles!

glad to hear u found some peace Jack…. enjoy the ride and your friends! all my best always 🙂