Staring Down The Path Tour. Day 6 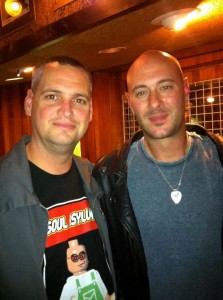 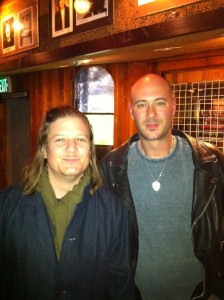 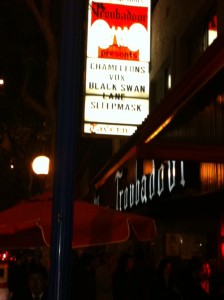 The trip from Phoenix to LA is relatively short and also meant we weren’t going to sleep too much again.  I think I’m getting accustomed to waking up early now.  It has been a while since I had been to California and I had forgotten how beautiful the mountains are and how awesome the weather is in the winter.  We got to the world famous Troubadour five hours early and had time to kill in LA.  I called an old high school friend, Ryan Smith, and we met for Lunch along with John Kolbeck and our driver, Sam.  It has been exhilarating seeing friends I haven’t seen in twenty years and I’m very appreciative for them reaching out to me.  It has made the trip much more comfortable in more ways than you could ever know.  The restaurant we stopped at had fresh & creative cuisine and was a good change from truck stop food.  Ryan drove John and I to Hollywood, which was very close to the venue and we did the tourist thing for a bit.  We walked down the Hollywood walk of fame, took some pictures and grabbed a taxi back to The Troubadour since it was getting close to  load in and sound check time.

I had never been to The Troubadour before, but its music making history is well known knowledge around the globe.  Many bands have been discovered there and its reputation is rich.  The club lived up to the hype and all our expectations were met.  The fans in Los Angeles did not let us down either.  The packed club gave us a very warm response and embraced us like no other venue so far.  I have to say, in all fairness, we finally had our act together as a band for this one as well.  We were tight and played with passion and I think we are meshing as a band now.  I’m anxious to see the video from this one!

Another big surprise for me was the arrival of an old friend, Sean, who I hadn’t seen in years. In my early years, we played in a punk band called Subliminal Voice together which had tons of potential but never took off.  We reminisced about old times and shared a hug.  I looked up to Sean years ago and have thought about him for years.  It was truly great staring into his eyes again.

A huge thanks to Andru, from Sleepmask, for helping make this show happen in LA. His band was the opener and they rocked it out right before our set. This was another group of nice guys I had the pleasure of seeing in cyberspace but never in person.

After the show and after a longer trek to the tour bus, we contemplated getting a taxi to view the pacific at 2:00 am.  We decided, instead, to stay on the tour bus to eat and relax until our 5:00am departure.  John started playing his acoustic guitar on the bus couch and the remaining six of us who were still awake at this hour hummed and sang along with him.  After an exhausting show, it was an amazing way to end the day and also to see the way our favorite songs can create such big smiles.

2 Comments for Staring Down The Path Tour. Day 6

I saw you guys at the Troubador show and was blown away…I have downloaded a ton of your songs from iTunes and my new favorite song of the moment is “Second Soul”….wow, what a beautiful song with haunting guitar…reminded me a bit of the Ocean Blue from back in the late 80’s early 90’s..

We will see you guys again for sure wen you come back to L.A.!

Thanks, Chris. Truly appreciate the love & support.
All the best,
Jack
BSL