Staring Down The Path Tour. Day 9 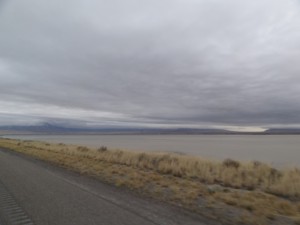 Travel Day / Somewhere Between California & Wyoming On The Way To Chicago

I woke up in Nevada after leaving San Francisco at about 2:30 am.  I was a bit melancholy having to say goodbye to my son, Josh last night.  I half seriously invited him to quit his Job, get on the bus and tour the rest of the US with us.  He could have been a great help and it would have been nice to have family aboard.  Half way through Nevada, it started snowing heavily, but a little ways after, it subsided. We needed the snow to stop to make up time lost at the last few fuel and rest stops.  Just went up to the front of the bus to snap some shots through the windows.  The mountains and landscape are stunning, especially with the snow covered caps.  I did, however, develop some altitude sickness earlier and couldn’t even focus on writing this blog.  I got some shortness of breath and felt a bit disoriented for about thirty minutes.  I chewed some gum, walked a bit and popped my ears and I’m doing a bit better.  Tony and Dean are currently sick as hell and I’ve been playing doctor and pharmacist with them attempting to get them back to health.  Hopefully, my experimentation on them will yield some positive results…

We are now headed to Salt Lake City for a bus repair, evidently.  The driver air bag has malfunctioned and I think we need an overall check before heading to the coldest part of the country.  I’m not sure this particular bus has a very long life left on this earth.  After Salt Lake City, we are planning to continue on to Cheyenne, Wyoming, if possible.  I’m not exactly sure how Sam, the driver, is going to do it, but we’ll see.

Our live set kept getting tighter and I’m worried two days off may make us a bit rusty, but at the same time, we are going to need the rest. Desperately.  The only other day we are off now is on Thanksgiving until the end of the tour, so we have to save our strength!  A friend of ours, Justin, just extended an invitation for Thanksgiving dinner at his home in Brooklyn, so we may have a proper Thanksgiving dinner after all.  He has also played live with Mark from The Chameleons in the past and his band is opening up one of the New York shows.  Seems like a very cool guy.

We just put the film Casino Royale in the player, so I will touch base in a few…

So we just had our first police stop right outside of Salt Lake City, Utah.  Of course, I had to be the fortunate one in the front seat of the bus when we were stopped.  I was pulled out into the cold windy conditions by what looked like one of the Romney siblings and grilled about whether we had marijuana on the bus or not.  The officer said he smelled marijuana on our bus, which is a fabrication.  Since the beginning of the tour, there have not been any drugs on our bus.  I explained passionately that this was a drug free bus and he was welcome to search it.  My nerves were completely shot during the encounter.  With the lack of sleep, I probably look like I’m completely wasted.  The officer also explained that he could tell our bus is in bad shape and needed immediate attention on the suspension. We explained we were headed to Salt Lake City for a rest and repairs and he let me off with a verbal warning and jokingly told me I should get a refund from the bus company.  We have arrived at Le Bus in Salt Lake to fix the suspension of the tour bus.  And yes, it is really called Le Bus.  How many days till I get back home?

Jack, you posted this as the 19th and it is still the 18th. you can’t speed up time this way – i thought we talked about that. you need Stewie’s time machine ~ not the smelly old bus.

i send every wish for love, happiness, good fortune, true warmth, kind people, great food and – PEACEFUL sleep to you and your men. hopefully, your sleep will be laden with beautiful dreams that help you release your sense of isolation and allow you to feel the love that surrounds you. if there’s anyway that i may help ~ please let me know and i’ll do my best to assist. promise.