The Last Time In Your Light 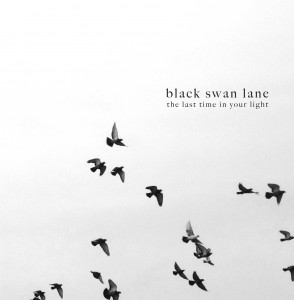 A big sigh of relief. A huge breath as I finally relax and breathe. The newest BLACK SWAN LANE album is complete. Just got word from the manufacturer that the album is being shipped out. This was the longest we have ever spent recording and mixing a record. A lot of thought was put into this one and some tough moments were spent deciding which tracks to keep and which to put aside. If I can listen to them a few hundred times and still love them, they usually make the cut.

We started recording this one at the beginning of 2012, right after the big US tour. Home, one of the singles on the album, was the first track that we got down on tape and we were off to a hopeful start. Writers block and health issues blocked our path for the next few months and our promise to deliver a record in 2012 was improbable. We also took a big detour to help record and produce Andy Whitaker’s first solo album which was delivered mid 2012 to very positive reviews worldwide. If you don’t have Things That Happened On Earth, it is about time you get it. Andy’s album brings the great Manchester vibe back to the scene.

Anyway, in the summer of 2012, we seriously got back to writing and recording new BLACK SWAN LANE material. A lot had been happening around me personally, so the writers block faded and new music started pouring out. Our great friend, band manager and girl Friday, Tara, in Arizona, had a near death experience as well. Swimming with sharks off the coast of Columbia can’t be the safest of things to do.  The notes from that event and similar ones, helped inspire some real life and meaningful lyrics.  You will have to listen to the song, Malpelo, on the new album to find out more…

There are a lot of references to god and a higher power throughout the album. The references are not to be taken as religious in nature, but more as questioning theology and whether there is a higher power up there pulling all the strings. Imagine trying to make heads or tails of the universe and why everything can be so mucked up at times. I have, however, always been envious of people who can so faithfully give their entire lives over to something that has never made any logical or scientific sense to me. When you are lying in a hospital bed, thinking this is it, you sure do start hoping there is more to come though.

The rest of the album is filled with some existentialism thoughts, future hopes, sad times  and delineations of people that you once thought were your friends, who are really nothing at all. We did decide to include the lyrics inside the cover of this one, so happy reading.

We are not an easy band to deal with in the studio. Forget the fact that John, our lead guitarist, is a complete perfectionist when it comes to tone, pitch and such..I typically write the music first and then have to come up with the arduous task of placing words on top because you’re supposed to have words, of course. Sometimes the words don’t always fit nicely. This creates situations of having to decide whether to re record the entire thing or start cutting and pasting things around.  There are other occasions where you believe the song is perfect going into the mixing studio and then develop feelings for change half way through. Ultimately, songs that were once intentionally eight minutes in length may get cut down to five for consideration to the listener. We definitely got our money’s worth out of Jeff Tomei, who mixes our records. It’s never super easy, but the final album always comes out wonderfully. The mastering was done by Donn Aaron in Atlanta, who I highly recommend for any and all musical projects.

At the end of the recordings, I am always looking for that one big one. On the last album, it was the song, Low. It’s that last minute push for the song that you think will make the whole record better. On this record, we got two. Stranger & Relax and Breathe. Of course, we made them the first two tracks on the album and fought over which deserved the first spot. When we laid down the tracks for these two songs, I saw the light at the end of the tunnel and knew we had a complete record. When Stranger was fully recorded, I kept hearing (and dreaming about) a full on African American choir going on in the background. Since I am not a member of an African American baptist church and funds were getting lower by the hour in mixing, I settled on a black teenage girl I overheard singing to herself at a skating ring one night. It seemed like fate to approach a stranger to sing on a track called Stranger. Dyiesha, with the proper approval of her parents, was quickly invited to become our backup singer and meet us at Cock of the Walk studio, where chainsaw wielding, southern rocker, Jesse James Dupree resides. We could have made that whole scene into a reality show. A shy teenager out of her element, singing her debut on a BLACK SWAN LANE record while Jesse is filming snipits in the other room for Full Throttle Saloon on Tru TV. Lauren Fay, who sung on our last record, and who did an amazing job, was out having another child, so I was very happy to find a very last minute replacement.

We had tons of names typed on the cover of who we were going to thank, but we ran out of room.  And of course, I felt I was going to forget so many, so we removed the whole thing. If you have ever tried to promote us or help in anyway, you know who you are and you know you have our sincere gratitude for life.

I could tell you several hundred other stories, but I’ll stop for now. Bottom line-please support the little guys producing music that is far better than what is being drained into your heads on the radio at the moment. Yes, there is a new Ke$ha album out and I hear New Kids On The Block just reunited, but I would highly recommend buying the new BLACK SWAN LANE album because it is not going to suck. I’m very proud of this one and a ton of effort and funds went into producing it. Buy it and tell your friends to support us, so it won’t be – The Last Time In Your Light.

To stay up to date on everything going on, please like our new Wanderland Music facebook page at http://www.facebook.com/WanderlandMusic – In addition to plugging BSL and Andy Whitaker, we plan on having some fun with the new page. Behind the scenes photos, videos, endorsements and stuff we just like will be part of the posts. Remember after clicking like, hover over the liked button and click receive notifications! Encourage your friends to be a part of BSL and Wanderland so we can continue to grow.

All BSL albums are available for sale at blackswanlane.com, wanderlandmusic.com or digitally on CDbaby.com and on iTunes. Albums purchased on our website are processed and shipped out the same day and come with a BSL guitar pic, sticker and signed postcard.

Please check out our newest album as well, Staring Down The Path Of Sound

Thanks for listening and please spread the word and tell every person you know about BSL !!